50 earthquakes hit off the Oregon Coast, but scientists say they’re no great shakes 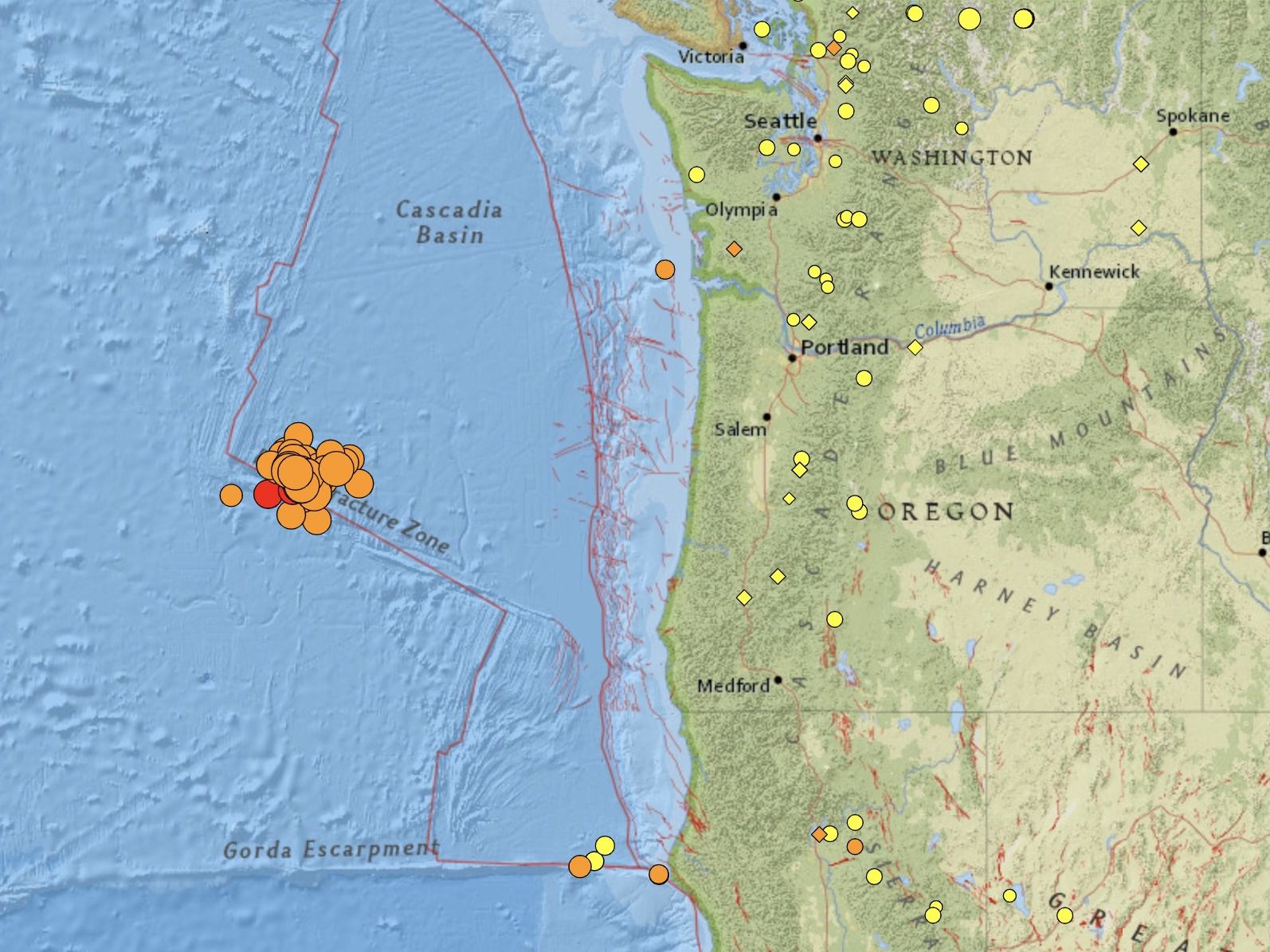 The Blanco Transform Fault Zone off of Oregon’s coast is famously active, and it has not disappointed in the past 24 hours, generating at least 50 earthquakes, including two at a 5.8 magnitude.

That sounds like a lot — but scientists say the fault is virtually incapable of generating a cataclysm, either by a tsunami or a powerful quake affecting the U.S. mainland.

The swarm of quakes hit around 200 miles from shore, according to the U.S. Geological Survey. As people took notice, they worried that the seismic activity might portend The Big One.

"Is that the Cascadia subduction zone talking?" a Twitter user replied to a USGS post about the 5.8 quake. "Because that would be all kinds of not good," they said, referring to the fault line that runs from northern California up to British Columbia.

"The Blanco Fracture Zone is not connected directly to the subduction zone so it won’t affect the big fault under land (Cascadia megathrust)," said Eric J. Fielding, a geophysicist at NASA’s Jet Propulsion Laboratory in Pasadena, Calif.

"M5s on Blanco are very common and have never been followed by something on land. Plate tectonics in real time," said seismologist Lucy Jones, referring to magnitude-5 temblors in the area.

The Blanco Fault Zone is a transform or strike-slip boundary; that means it’s where tectonic plates slide along one another. The most dangerous and powerful faults are usually seen in subduction zones, where one plate dives beneath another.

"This is perhaps the most seismically active fault anywhere near North America, and this is not cause for alarm," said Harold Tobin, who leads the Pacific Northwest Seismic Network and is a professor at the University of Washington.

The Blanco zone is farther out in the ocean than the Cascadia Subduction Zone, which — thankfully — has not generated an earthquake since 1700.

The fracture zone has been compared to a warm cookie

Because of the Blanco zone’s frequent activity and proximity to the coast, it has become a favorite study area for seismologists and researchers. As geology writer Dana Hunter once put it, "The BFZ is seriously awesome and a lot of fun to get to know!"

Explaining one reason the fault’s quakes aren’t likely to be felt on the coast, Hunter noted that the Blanco has a "young, warm crust" — even comparing it to a fresh-baked cookie — adding that the crust in that part of the ocean floor is more likely to crumble than to transmit powerful seismic waves to Oregon and California.

Scientists have frequently said people who live along the Oregon Coast should not worry about a tsunami coming from the Blanco fault.

"You need quite a bit of vertical displacement on the ocean floor to generate a tsunami, and earthquakes along the Blanco fault don’t generate it," seismologist Jochen Braunmiller said in 2008, when he was studying the region while at Oregon State University.

In the same year Braunmiller and his colleagues published their paper about the Blanco Transform Fault Zone, OSU researchers reported that a swarm of 600 earthquakes had occurred over just 10 days.

As for the neighboring Cascadia Subduction Zone, residents can be forgiven for keeping an eye on it:

"Oregon has the potential for a 9.0+ magnitude earthquake caused by the Cascadia Subduction Zone and a resulting tsunami of up to 100 feet in height that will impact the coastal area," according to the Oregon Office of Emergency.

The agency adds, "Currently, scientists are predicting that there is about a 37 percent chance that a megathrust earthquake of 7.1+ magnitude in this fault zone will occur in the next 50 years."

A version of this story originally appeared in the Morning Edition live blog.