Wind and snow conditions are so extreme Monday morning in Eastern Oregon that many snow plow drivers could not see the roads well enough to plow them.

That prompted the Oregon Department of Transportation to close Interstate 84 from Pendleton to Baker City for much of Monday, and at least seven state routes and more local roads are also closed. Transportation officials have asked all motorists in the Umatilla County area to stay home. They’re warning that anyone who drives on a closed roadway risks being stranded until conditions improve.

I-84 was intermittently reopened and reclosed Monday afternoon as conditions fluctuated and collisions obstructed passage.

More than a dozen school districts in Umatilla, Morrow and Union counties closed on Monday. And with a new storm system expected to move through later Monday, conditions may not improve for several days. 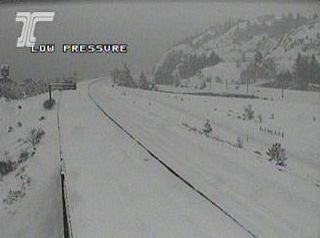 Further west, I-84 through the Columbia River Gorge was also closed due to a winter blizzard that’s brought whiteout conditions. Multiple crashes have been reported between Troutdale and The Dalles. Road crews said Monday morning that it will be a lengthy closure, and they urged people to take alternate routes. One major alternative, Washington’s State Route 14, was closed from Washougal to White Salmon for much of the day, however, and remained closed to heavy trucks when it reopened late in the afternoon.

The National Weather Service is urging people to travel with caution, and to avoid Cascade mountain passes if possible. The Cascades and surrounding foothills could see another 15-30 inches of snow above 2,000 feet elevation.

On Mount Hood, ODOT is reporting that hazardous conditions have forced the closure of U.S. 26 near Rhododendron up the mountain to OR 35 with high winds, blowing snow and poor visibility. The same conditions also led to the closure of OR 35 from U.S. 26 north to the Hood River county line. The Timberline ski area and Ski Bowl were closed due to unsafe snow conditions, though officials said they hoped to reopen Tuesday if weather permits.

In the Portland metro area and much of the Willamette Valley, that heavy precipitation in the form of rain prompted the National Weather Service to issue flood watches that were in effect through Monday afternoon. The agency also issued flood watch and coastal flood advisories for the Oregon and Washington coasts into Monday afternoon.

The flooding also led to an overflow of stormwater and sewage in Portland’s Big Pipe system that spilled over into the Willamette River at about 3:15 a.m., according to the Portland Bureau of Environmental Services. The agency released an advisory Monday urging residents to avoid any contact this week with river water downstream of the Ross Island Bridge. With rain forecasted all week, that advisory extends until Sunday.

Pacific Power said it had restored service to more than 47,000 Oregon customers from Sunday to Monday afternoon and that as of about 5 p.m., that most of the remaining 7,600 customers should have their power restored by midnight.

In Washington, Interstate 90′s Snoqualmie Pass over the Cascade Mountains was closed Monday due to blowing snow, zero visibility and avalanche concerns. State transportation officials said it was scheduled to reopen around 8 p.m. Monday.

“It will (hopefully) open at 8 pm,” the Washington state Department of Transportation said on Twitter. “That means there will have been 18 hours to get your chains put on. So please do it. We don’t want to open and then have to close it again at 8:15 because of spin outs. Thanks!”

The Associated Press contributed to this report.